Please select a country to view our offerings for your region

In case your region or country is not listed, visit our global website. 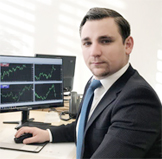 Currency Markets the dollar struggled near a 13-month low against a basket of major currencies on Monday as U.S. political turmoil dampened hopes for quick passage of President Donald Trump’s stimulus and tax reform agendas and the euro extended gains. The euro was steady at $1.1668 after inching up earlier to a 23-month high of $1.1684. The dollar fell 0.15 percent to 110.970 yen , with the Japanese currency at its strongest in roughly five weeks. The Australian dollar traded at $0.7923 after being pushed down from a 26-month high of $0.7992 scaled on Friday. The New Zealand dollar fared better, staying in close reach of $0.7460.

US Equity Markets  stocks ticked lower on Friday as weak earnings from industrial giant General Electric weighed, while tech stocks retreated from record highs and energy tracked the price of oil lower. The Dow fell 0.15 percent, to 21,580.07, the S&P 500 lost 0.04 percent, to 2,472.54 and the Nasdaq Composite fell 0.04 percent, to 6,387.75. General Electric shares fell 2.9 percent. The company reported a nearly 60 percent decrease in profit and said its full year profit and cash flow will be at the low end of its forecasts. Microsoft shares fell 0.6 despite a strong earnings beat after the bell Thursday, propped in large part by its fast-growing cloud computing business.

Bond Markets U.S. Treasury yields fell on Friday, with benchmark yields hitting three-week lows, as the euro reached a near two-year high against dollar, raising doubts whether the European Central Bank would scale back its bond purchases later in 2017. The benchmark 10-year Treasury yield was down more than 3 basis points at 2.230 percent after hitting a three-week low of 2.225 percent.

Asian Equity Markets Japanese stocks fell to more than two-week lows on Monday morning after Wall Street retreated and a stronger yen dampened sentiment, while traders were also wary that the long-term rising trend in the broader Topix may run out of steam soon. The Nikkei index declined 0.9 percent to 19.932.30 in midmorning trade. MSCI’s broadest index of Asia-Pacific stocks outside Japan was down 0.2 percent.  Chinese stocks bucked the trend, with bluechips up 0.3 percent and the Shanghai Composite advancing 0.2 percent. Hong Kong’s Hang Seng added 0.4 percent. Australian stocks retreated 1 percent and South Korea’s KOSPI edged down 0.1 percent.